Morning in Izmir and the Benefits of Not Planning

I had a moment around this afternoon when I was like, oh my God, what is this that I’m feeling? Is this joy? Is this what a stroke feels like? What’s happening to me? And then I realized that no, what I was feeling was this thing called complete relaxation. It’s diminishing somewhat as I write this from the lobby of the Hilton which was quiet a minute ago but they’ve just put on what I think is supposed to be relaxing, kinda jazzy elevator music. However- it existed! It was real! I was completely relaxed!

I checked out this morning and wandered back to the Hilton to drop my bag off with Sara while I wandered around and she prepared a report. This, first off, is the view from that jerk’s room.

Then I wandered out to have a wander and see what there was to see. (Sara, a cartographer by trade, was sympathetic to my inability to read a map and gave great, dummy proof instructions to some local stuff.) First I wandered down THIS great street

which a little further down has book stalls, and, um, cages, I guess, for artists, and then little artisan stalls that sell jewelry.

From there it was easy enough to walk into a spectacular public park. Just beautiful. 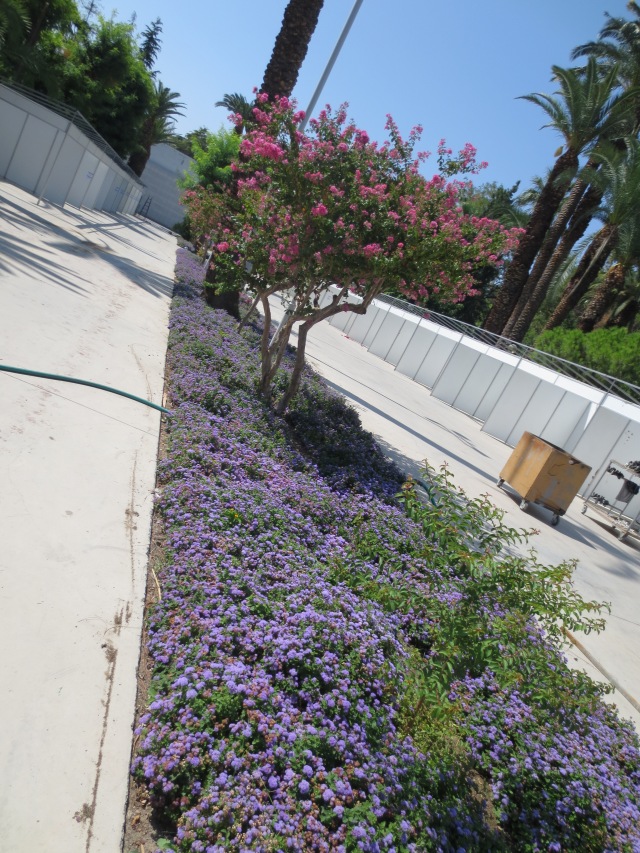 I sat and read for a bit, but then my tummy started grumbling, so I moseyed on. I haven’t told you this yet, but yesterday I saw possibly the most exciting thing I’ll see in Izmir.

Admittedly, I haven’t had chinese in Istanbul, although I’ve heard rumors that it’s available, mainly because I’ve also heard rumors that it’s expensive and awful. And if gonna traipse to Europe I’m gonna go for something that I KNOW is good. So I haven’t had Chinese in three years. And I’ve missed it. I’ve missed the gluey, msg-ey comfort of a carton of greasy mystery meat, and plain white, faintly soap tasting steamed rice. I’ve missed wontons and spring rolls. I’ve missed collecting little packets of duck sauce and soy sauce. Sigh. So yesterday I did the obligatory meze with Sara, but today, left on my own devices, I beelined for it as soon as it was something close to a reasonable lunch hour.

There was a decent lunch special- hot and sour soup, (without pork!!!!) a spring roll, a beef dish, and fried rice for 13.50. But if I was gonna do this I was gonna do it right, damn it. Back to the childhood favorite: sweet and sour chicken. At 30 TL, not a bargain, but what the hell. And how could I choose between spring rolls and wontons? HOW?

The quality fell a little between corner takeout and say, aging Baltimore people, if you remember Uncle Lees, downtown? The upscale joint that served Americanized Chinese? The chicken, came, perplexingly, sans rice. Perhaps that’s a separate order, but the only rice I saw on the menu was fried rice which would’ve been WAY too heavy with this, so no complaints. The chicken was not deep fried, which actually, ridiculously caused me a moment of sadness, until I bit into a wanton- perfect, perfect in every way- and then a spring roll- oh god, so greasy! so delicious!- and realized my deep fried quota was probably well met. The sweet and sour sauce tasted as it ought and was as fluorescent orange as one should expect. The chicken was tender, they hadn’t forgotten the pineapple, (turkish palates are really against fruit and meat together, but have no problem putting chicken in a sweet pudding.) I was very, very happy. Forty five minutes later:

and even I could eat no more. The bill came to about 80, with tip. Worth it, but I still upbraided myself for consuming more calories than I probably did in the three days leading up to vacation and spending more than I spend on food in a typical week. Then I burped gently and left my guilt at the door.

Next, clearly, some sport was needed so I took a leisurely stroll by the water. Oh my god. Just, oh my god. 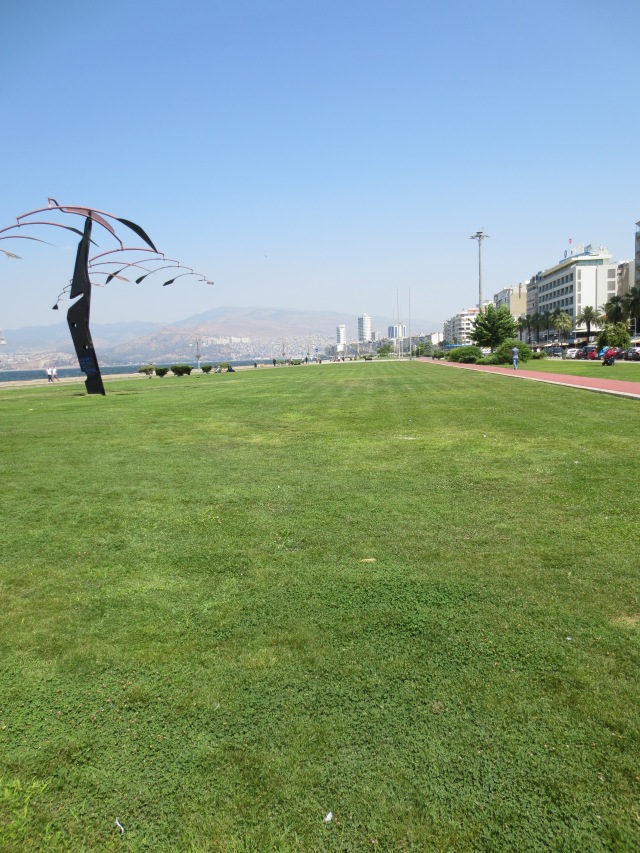 When I’d walked to the ferry station (out of sight here) and back I stopped by the Ataturk museum as I felt I ought, and was not too sad at the sign on the door.

I took a picture of this thing

and then sat in a cafe for TWO HOURS, reading and staring at the Aegean Sea and having dozey thoughts about history and letting the wind do crazy things to my hair.

How successful would a kickstarter campaign to raise money for me to stay on vacation for ever be? Would YOU donate?

This entry was posted in Uncategorized. Bookmark the permalink.