How to do the Islands

Posted on August 6, 2013 by agentlabroad

Agent L will just go ahead and say that the Adalar are overrated, expensive tourist traps full of screaming kids on bicycles.

Having lived on Kınalıada for two months, the charms of the gorgeous little houses, the views and the lack of cars were overshadowed by the nerve wracking commute, (you do NOT want to miss the last ferry, or fall asleep and miss your island) and the noise- the noise! Kids screaming in the street until well past midnight. Seagulls starting in at 3 am. Call for prayer shortly before dawn from a minaret so close to my flat you could have sworn it was in the bathroom. Half an hour later, just as I was drifting off again, church bells. I was sleep deprived and cranky, and spending an inordinate amount of time in Bostanci, angrily waiting an hour and a half for the next ferry after just missing one. Yuck.

As far as places to visit go, they do have one thing going for them- convenience. It takes about an hour to get there, (do enjoy your view of the Navy cadet on duty at Heybeliada) 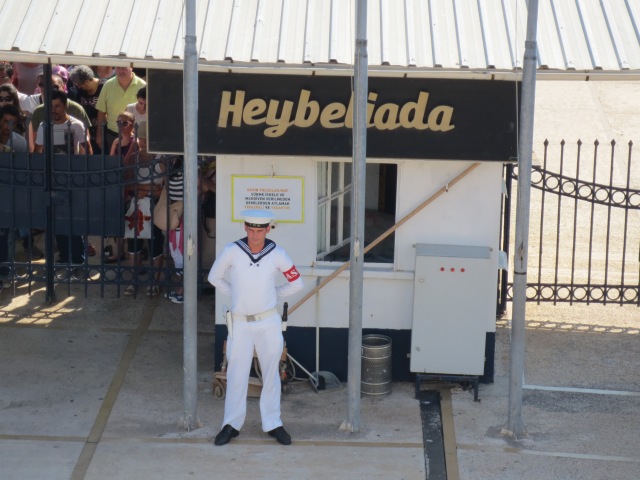 and then, yes, you CAN go swimming. Depending on which way the wind is blowing you might be swimming in literal trash, but you can go for a dip. The houses really are charming, and the flowering bushes a balm on nerves frazzled by the pace of Istanbul life. The much touted horse carriage rides are just kind of depressing, though. The horses are SO SKINNY! And yes, on Buyukada you can rent a (very poorly maintained) bicycle for a few lira and take off for an island tour but I personally never really saw the appeal of riding a bike in a big circle, and if I’m having a leisurely cycle on a beach bike, I’d prefer a landscape more like Virginia Beach or the Outer Banks than the Alps. Oh, there’s a view at the top? This city is full of spectacular views. You cannot tell me it’s worth it. I’m not all hate, though. Hannah and I had a lovely day there yesterday, because we took precautions and did it smart. I now present you with the Agent L Guide to Doing the Islands Right.

1. Pick an island and get to know it pretty well. I’ve dabbled in other islands, but I’ve determined that Kınalıada, which is more residential and less popular than the others, is my jam. There’s a decent, by Ada standards, beach and far fewer tourists.

2. Go in the late afternoon, on a weekday if possible. Yeah, there’s a huge, annoying gap in ferry service in the early afternoon, and you might be tempted to try to get there before noon so you can eat more overpriced meals by the water and really savor walking up and down the three or four residential streets 17 times, but a. there’s not actually that much to do, b. the beach chairs don’t generally come with umbrellas which means you’ll be broiling in the sun for hours, and if you are genetically blessed with skin that is naturally the color of photo copy paper like Hannah and me, that’s a terrible idea and c. it’s crowded as fuck during the day. If you take the 3:45 from Bostanci, though, and get there at around 10 after 5, it will still be sunny but it’ll be quite a bit cooler, and people who’ve been lying on beach chairs all day will be decamping en masse, 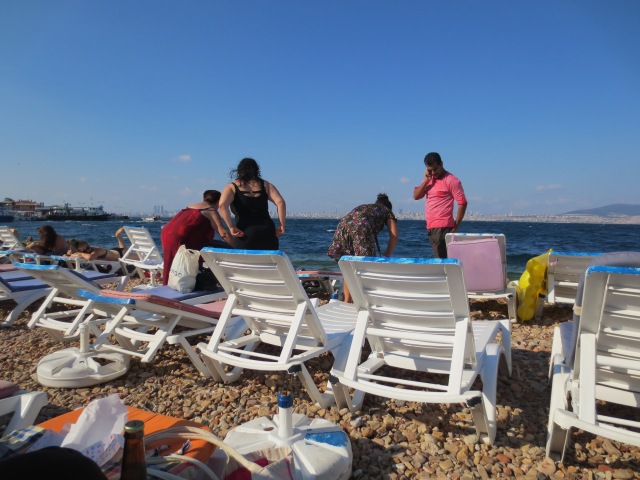 and the chairs themselves will be a bit cheaper. So to recap- you don’t over-radiate your skin and sit in a puddle of your own sweat and you have the place to yourself.

3. When you exit the ferry at Kınalıada turn left. Walk along the waterfront and try to avoid the many small boys on bikes who are riding pell-mell through very crowded streets with the verve and enthusiasm exhibited by small boys that makes me question, occasionally, how any men make it to adulthood. After a block or two you will find a mussel sandwich, kokoreç stand. Get a mussle sandwich. Of course, get it with sauce. Why would anyone not get it with sauce? If you are a hale and hearty eater as Hannah and I are, get two. While they’re assembling the sandwiches, walk into the grocery store across the street and buy a couple beers. Then find your a seat to your liking, you will have your pick because everyone really will be leaving, and plop down. 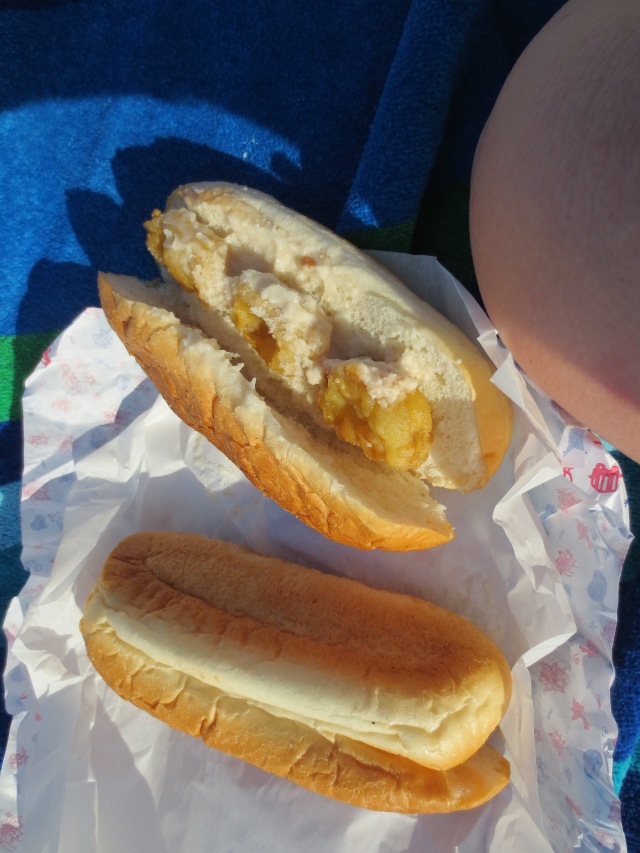 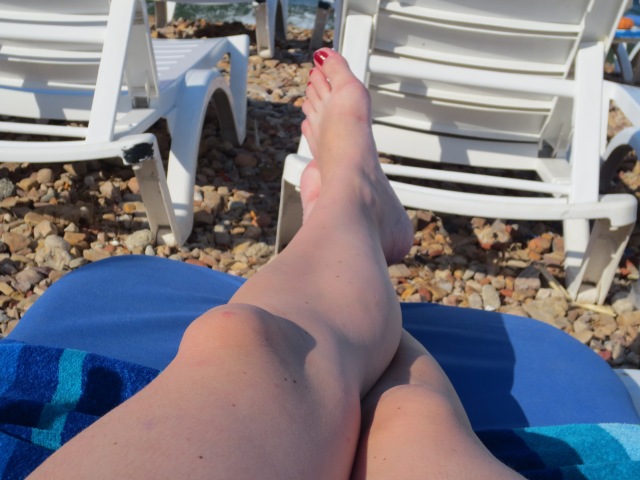 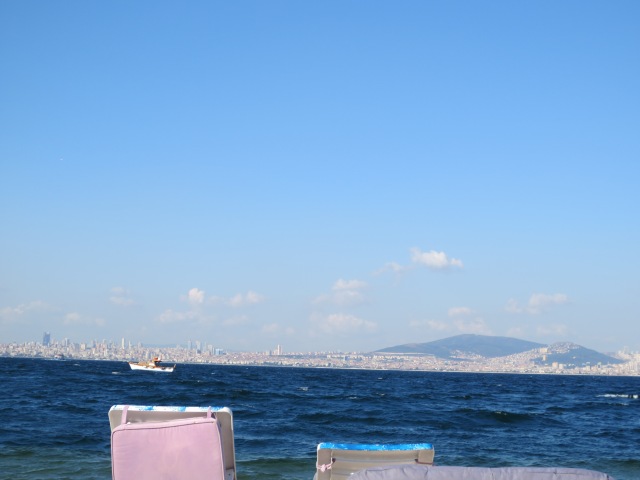 4. After you’ve eaten and let the food settle you’ll determine that it’s time to take a dip. Just know that the beach is rock, and your feet will hurt. Not so much going in, for some reason, as coming out. 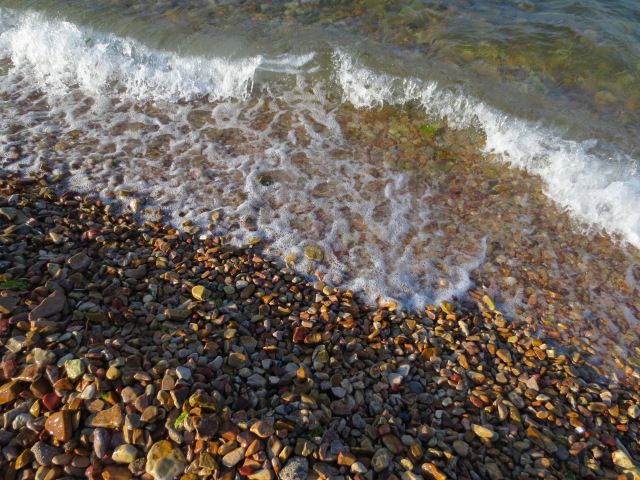 Upon exiting the sea, it will kind of make you want to die.

5. When hunger strikes again, take a stroll. Be surprised and alarmed by some of the local businesses. 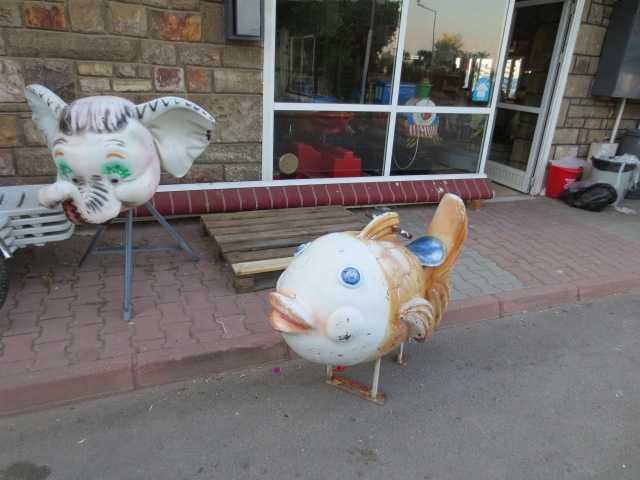 Amuse yourself by taking pictures of TERRIBLE PANTS. (Promise and threat, the terrible pants of Istanbul, now that we have a working camera, is an upcoming post.) 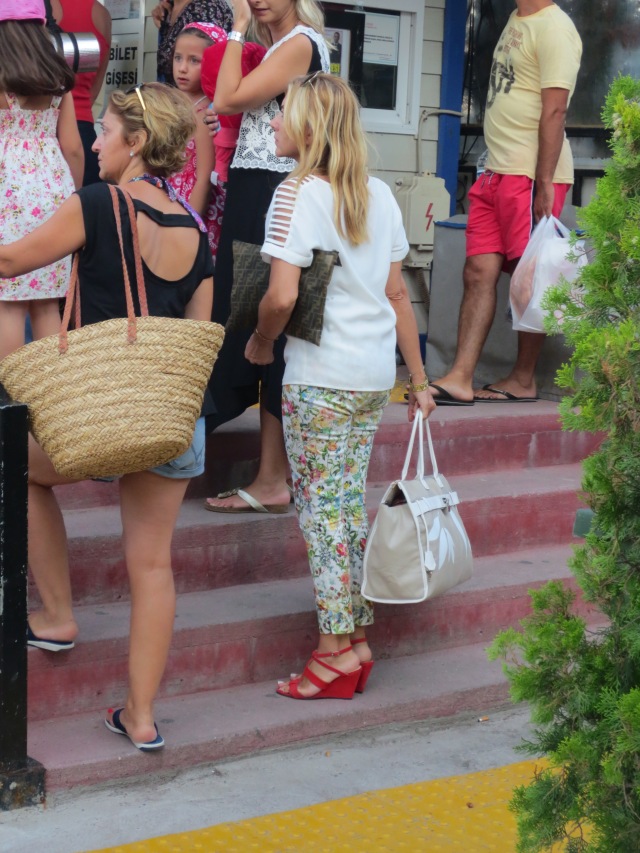 5. Go get dinner. There are lots of choices, and they’re more or less interchangeable, so just pick the restaurant with the chairs you like the most. Order some meze. Splurge and get some karides and octopus salad. 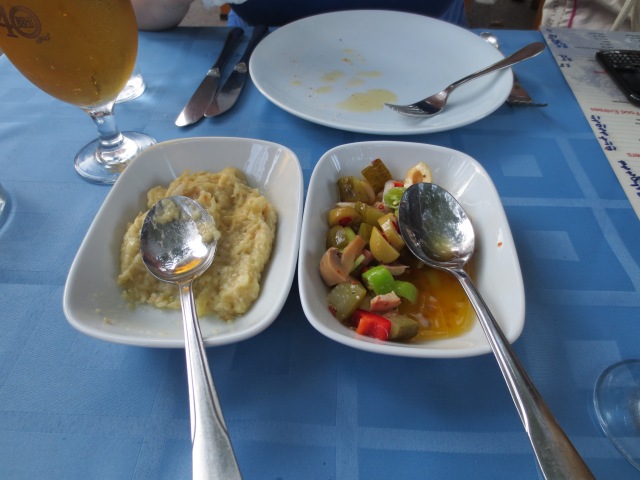 6. Try to arrive well before your intended ferry leaves. If you arrive two minutes before, you may have the pleasure of watching it sail away, and the next one, guarantee, won’t be for another hour and fifteen minutes. If you miss that one as well, for the same reason, you’ll be super cranky.

So that’s the Islands! Enjoy!

2 Responses to How to do the Islands